Traffic shaping (also known as “packet shaping”) is the control of computer network traffic in order to optimize or guarantee performance, lower latency, and/or increase usable bandwidth by delaying packets that meet certain criteria. More specifically, traffic shaping is any action on a set of packets (often called a stream or a flow), which imposes additional delay on those packets such that they conform to some predetermined constraint (a contract or traffic profile). 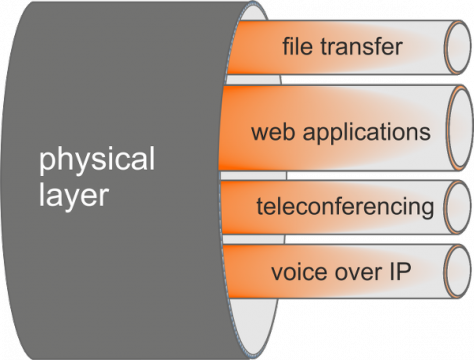 Traffic shaping within OPNsense is very flexible and is organized around pipes, queues and corresponding rules. The pipes define the allowed bandwidth, the queues can be used to set a weight within the pipe and finally the rules are used to apply the shaping to a certain package flow. The shaping rules are handled independently from the firewall rules and other settings.

OPNsense traffic shaping is a reliable solution to limit bandwidth or prioritize traffic and can be combined with other functions such as captive portal or high availability (CARP).

Bandwidth limitations can be defined based upon the interface(s), IP source & destination, direction of traffic (in/out) and port numbers (application).

Available bandwidth can be shared evenly over all users, this allows for optimum performance at all times.

Traffic can also be prioritized by adding queues and defining weights. Strictly speaking traffic is not really prioritized but applications with a higher weight can consume more bandwidth than others when the total available bandwidth is limited.

The traffic shaper implementation uses IPFW and dummynet to offer a modern, reliable solution with a low cpu footprint.

Dummynet operates by first using the firewall to classify packets and divide them into flows, using any match pattern that can be used in ipfw rules. Depending on local policies, a flow can contain packets for a single TCP connection, or from/to a given host, or entire subnet, or a protocol type, etc.

Packets belonging to the same flow are then passed to either of two different objects, which implement the traffic regulation:

pipe
A pipe emulates a link with given bandwidth, propagation delay, queue size and packet loss rate. Packets are queued in front of the pipe as they come out from the classifier, and then transferred to the pipe according to the pipe’s parameters.
queue
A queue is an abstraction used to implement the WF2Q+ (Worstcase Fair Weighted Fair Queueing) policy, which is an efficient variant of the WFQ policy. The queue associates a weight and a reference pipe to each flow, and then all backlogged (i.e., with packets queued) flows linked to the same pipe share the pipe’s bandwidth proportionally to their weights. Note that weights are not priorities; a flow with a lower weight is still guaranteed to get its fraction of the bandwidth even if a flow with a higher weight is permanently backlogged.

The shaping rules can be defined in the rules section of the traffic shaper.

Read the how to, here: Setup Traffic Shaping