All reverse proxies are plugins and need to be installed first.

Why should a reverse proxy be used?¶

The packet filter itself cannot decide what should be done in application protocols. For such an inspection you can use deep packet inspection or a reverse proxy.

In addition, a reverse proxy can implement protocol specific access control lists as well as other checks to protect the application behind. Such checks are malware, spam, web attack detection and so on.

Reverse proxies support you to prevent common attacks to your web application by bots but will never provide a 100% success rate in detection of bad traffic. Especially a targeted attack will very likely be not detected because a lot of effort has been taken to prevent detection. Do not use a reverse proxy as a replacement / excuse for not fixing the main problems like known vulnerabilities in libraries, outdated software, or vulnerabilities in your own code by updating / removing them or by changing your own code.

A Proxy which is used by a client to connect to the internet. It is usually used in companies to scan traffic for malware. See the more specific pages (Caching Proxy) for more background information.

A reverse proxy is software which takes a request or a connection from a client and sends it to an upstream server. It may change some data if needed (for exmaple inject HTTP header or perform access control). A reverse proxy can be generic for any protocol, but is commonly used for HTTP(S).

A reverse proxy does not need to by fully aware of data it is transferring it needs to know, which upstream is responsible to process it and some metadata to know what it should do (like for caching a Cache-Control header and for authorizing an Authentication header in HTTP).

A webserver, in contrast to a reverse proxy, finally processes the request (the webserver contains the business logic in the web application) and sends a response depending on the request, which may be modified or cached by a reverse (for example Varnish, nginx) or forward proxy (see Setup Anti Virus Protection, Setup Caching Proxy). For example, a webserver serves a file called index.html from the local file system or processes an API endpoint and returns the result. A web server usually has an API for calling external interpreters:

Others include the interpreter directly into the webserver, are written in this language or in a C/C++ extension:

A single or multiple servers which can be used for load balancing the client request to. All servers used in an upstream must act equally (same protocol etc.) but do not need to run on the same port.

This is your listening application like nginx on port 80 for HTTP or your LDAP server on TCP/389.

These are the the configurations for the ports used for incoming connections. For example, if you bind a port to TCP/80 (standard port of HTTP), you can decide, what is going to be done with this request. The same is true for connections.

TLS replaced SSL and it is used to protect the application protocol against a broad range of attacks like snooping or data manipulation (for example ad injection, redirects, manipulation of downloaded files like executables).

Modern clients and servers should support TLS 1.2 and TLS 1.3. All others should be disabled. 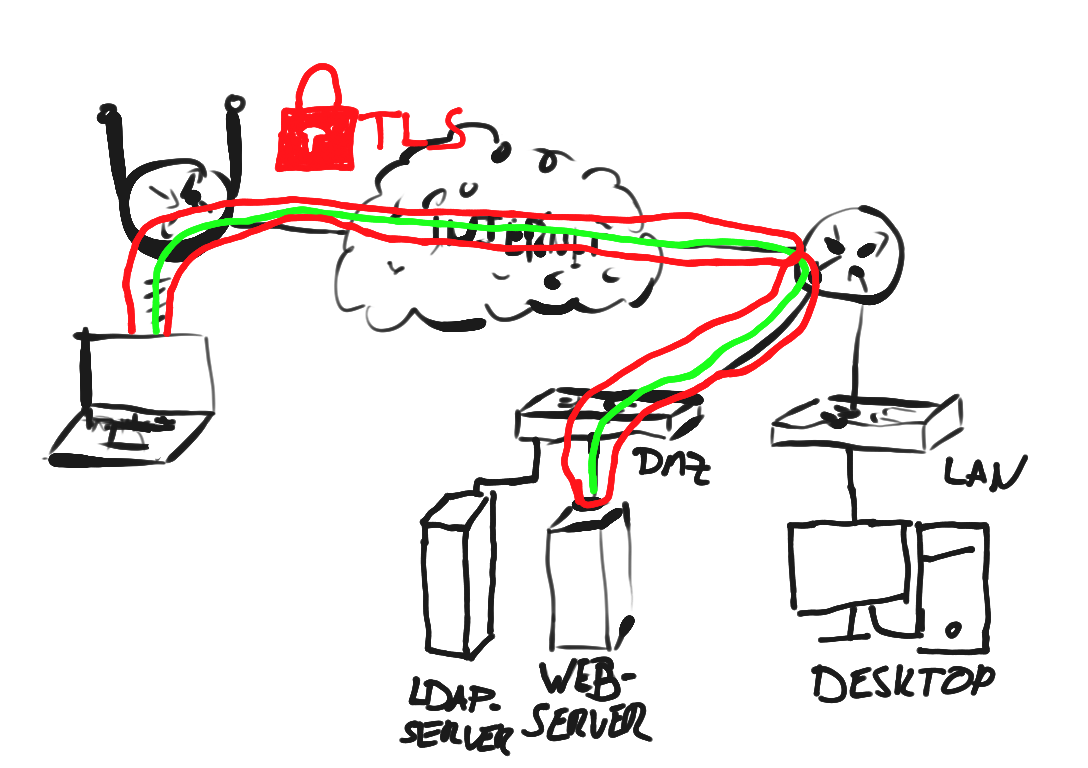 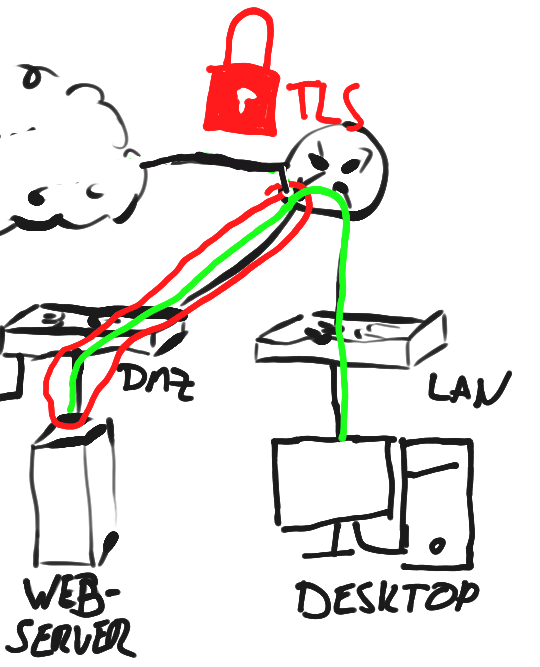 This setup may not make much sense in most cases. It may have the advantage if you have trouble with some software which does not allow a not encrypted port but a special internal client does not support it. For example a machine needs to talk to a server but cannot use TLS because the hardware does not support it. If you need that, do not make it available via the internet because there is probably a reason that the upstream server is TLS only. 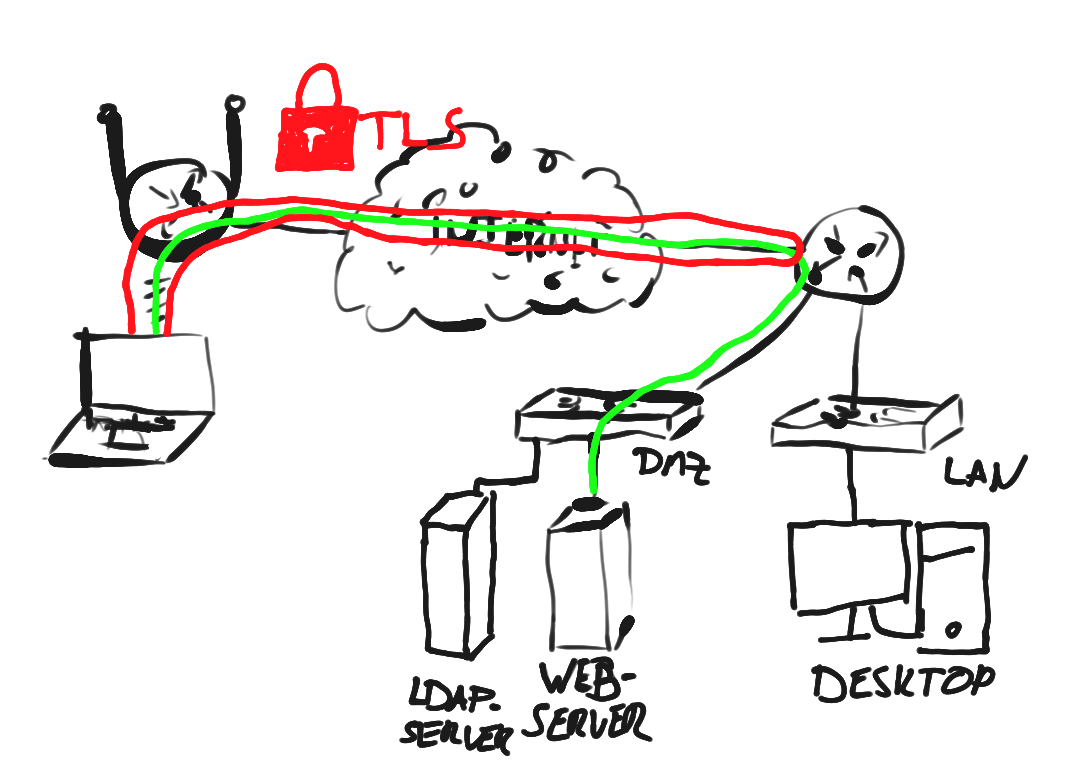 This setup should be preferred when it is supported. It has the advantage that it fully supports TLS for the client while it does not need a lot of power to do a TLS handshake inside your own computer centre.

You should not use this for upstream servers reachable via untrusted newtworks. Use (1) or (4) in such cases. 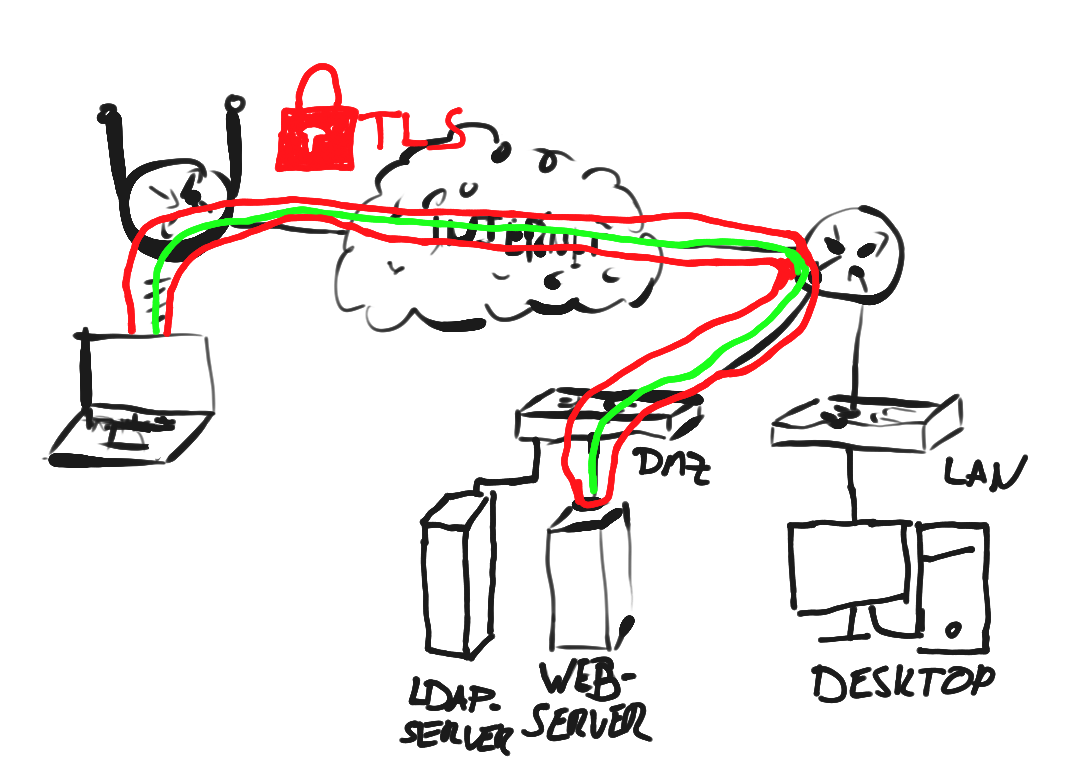 In this mode, the proxy will just pass though the connection and has no access to the encrypted payload. You cannot match on anything of the protocol itself. You may use some extension headers like SNI to decide, which upstream is used. This setup is recommended if you only want some improved routing decisions better than plain NAT.

A reverse proxy can still get access to the encrypted content if it has the private Key of the server and a cipher without PFS is used. In other cases the connection can only be decrypted if one of the peers escrows the key. Firefox supports this via the environment SSLKEYLOGFILE. This is not supported by OPNsense plugins.